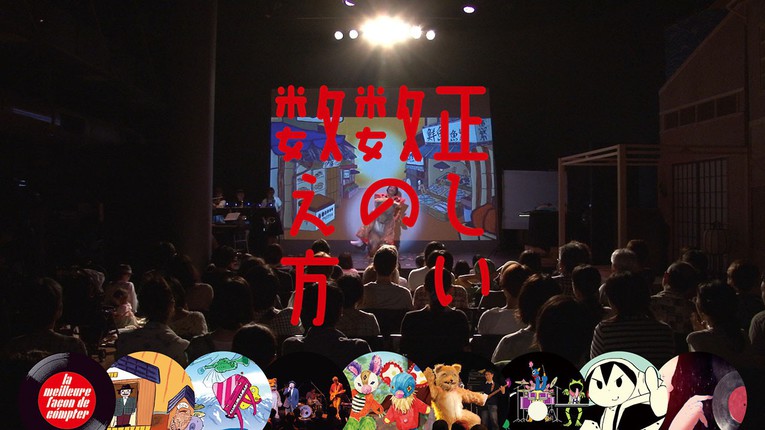 Best way for counting numbers is a music theater for children. It is an interactive performance composed of multiple artistic expressions including puppet show, drama, animation, and musical performance. The work was commissioned by La Gaîté lyrique, a digital arts center in Paris, and was presented in June 2015.
The stage is set in Paris at the 1900 World Exposition, where KAWAKAMI Otojiro and his company visit for a public performance. When the “Electricity God” casts a spell on the audience at the “Electricity Palace”, the company takes off on an adventure to find the “best way for counting numbers”.
The story is told by integrating the established techniques of puppeteering with interactive technology. At its 2015 Tokyo performance, the artist experimented further by adding live music performed by his own band “WATTS TOWERS”. This work is an ambitious entertainment show that challenges to expand the possibilities of performing arts.

KISHINO Yuichi has continuously contributed to the development of the underground culture. In this work, he invents a theatrical device that reveals the interactive exchange with children, using KAWAKAMI Otojiro (father of the Shinpa drama) as a motif. Since the artist’s spirit for entertainment / drama is steeped in critique and experiment, his work has been regarded as high-context culture. This time, he involves the children and steps toward popular entertainment. The educational spirit of “playing by making, and learning through counting” is a form of simulationism that transcends experiment, inherited from children’s TV shows in Japan from the Showa Era. The stage is reinforced with work created by six animators, some of whom are Japan Media Arts Festival Award-winners, turning the entire setting into new “media”. If this combined art of an utterly studious worker is not “Media Arts”, then what is? This work pulsates with a timeless and primitive spirit that defies technology. (UKAWA Naohiro)