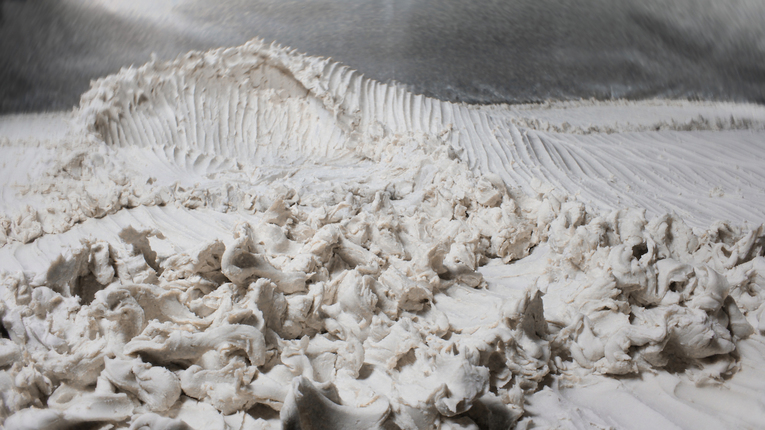 Suijun genten (Datum Point) is a poem written by ISHIHARA Yoshiro (1915–77), one of Japan’s most prominent postwar poets, who ex- perienced being detained in Siberia, Russia. This piece is a stop-motion animation video that the artist created by spending about a year carving the poem into clay. Waves made of white clay rise up one after another and gradually develop into huge undula- tions. Eventually, the “poem” appears in the waves, one character at a time. As soon as a character of the poem comes into sight while creating rip- ples, it is immediately swallowed up again by the waves, and this forces the viewers to cherish each character as they watch. The expression of clay animation brings out the dramatism contained within the simple repetition of the ripples. ORIKASA has been creating videos that present the act of writing and drawing as forms of movement (i.e., animation) using motifs of such literary works as The Happy Prince by Oscar WILDE and Jimen no soko no byoki no kao by HAGIWARA Sakutaro. His unconventional expres- sion of water and his viewpoint on capturing words have won him high marks.

Historically, masterpieces in the video animation genre have tended to focus on voices and text due to the nature of the medium. In the history through which many studies have been done on the generation of languages and images, I believe Datum Point has found a new place. ORIKASA faces off with a single poem and what he expresses is the actual appearances of the words themselves. The swell- ing of the waves that returns over and over again and the persistent move- ment in the crests of the waves are nothing if not astounding. The words carved into the surface of the ocean are swallowed up by more swirls. Watching this ocean being shot in units of 24 or 30 frames is very mov- ing because of the primordial joys of animation and as a documentary that has been left with tremendous physical scars. What concurrently leaves a strong impression is the ex- pression of water as a fundamental desire in the world of video making. Every great videographer has his or her own unique depiction of water. I would venture to say that ORIKASA’s expression of water is a form of miracle that video makes achievable. An ocean of words. The artist has set sail into the swirling sea of images. (ISHIDA Takashi)