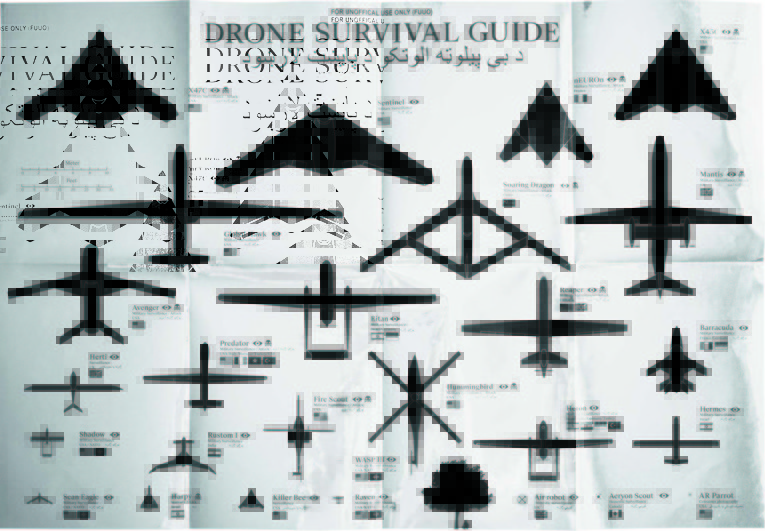 A pamphlet containing the silhouettes of the 26 most common types of unmanned aircraft, or “drones”, indicating their purpose and nationality, and also including a survival guide for protection in case of coming under their surveillance or attack. From a special website, a printable version translated into 32 langauges can be downloaded, while it is also possible to order a print on paper with a refl ective metallic coating that is supposed to inhibit the monitoring sensors of drones. According to a report, by 2032 the number of unmanned aircraft flying over America will climb to 30,000. Drones have a wide range of applications, from surveillance and attack missions to spy on or even kill people, to humanitarian and disaster relief missions that can help people survive. This work aims to familiarize us with these aircraft that will become ever more commonplace in the near future. Under what conditions will these unmanned aircraft be permitted to fl y over our skies, and how will accidents be avoided? In spreading knowledge related to drones, this is a work which suggests the necessity for a more intimate discussion about this situation.

Today when security cameras are installed everywhere, and communications are exposed to interception and hacking, it may be that even in the near future we will have to live with the anxiety of being detected by drone sensors. I also hear that drones are often equiped with Japanese-made lenses. This project followed Double Standards – Somali Seajacks 2010-2012, one of the Jury Selections, which Ruben PATER compiled as a result of his Master’s thesis. The knowledge he offers for protection, such as hiding in the shade of trees or using decoys, appears to be serious while also retaining humor. A guide downloadable for free from the artist’s website that advocates from around the world have translated, and the act of distributing at a cost an artwork made from highly reflective materials used in jamming is also unique. Proposed to a society he has closely studied for infringements on safety brought about by developments in science and technology, the work stirs action and a consideration of the right to protect life through creative humor and counter-intelligence. The work was judged to be a bold undertaking in which a countermeasure close at hand is devised, the reality of crisis quickly diffused, and cognitive and critical awareness raised. (OKABE Aomi)