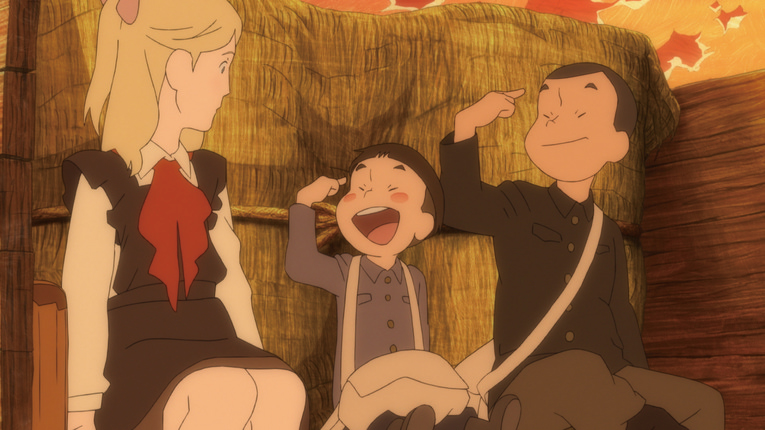 The setting is 1945 on Shikotan, a tiny island off the coast of Hokkaido, which has remained virtually untouched by the rage of war. There innocently live ten-year-old Junpei and his seven-year-old brother Kanta. But with Japan’s defeat on August 15th, great change comes to their lives. While everybody on the island is expecting American troops to arrive anytime, it is the Red Army that lands on Shikotan instead. Before they know it, the national borders have changed and for the Japanese community, a new life with the Soviet citizens who have moved onto the island begins. The film follows the absurdity and tragedy of war through Junpei’s eyes, depicting friendship among children blossoming beyond language and cultural barriers. Based on true events, this animated feature film was made by an international team including people from Japan, Russia, Argentina, South Korea, Estonia, United States, and Italy.

This is a truly beautiful work. Its animation technique and expression are superb, an example to show the world the level Japanese animation has attained as it reaches its centenary. Based on the factual reminiscences of former islanders from when they were children, the film falls within the bounds of documentary animation but is not simply a recreation of records or memories. It is a composite work, not one individual’s story but formed out of collective experiences and memories, deftly interweaving other islanders’ experiences and the incidents that happened on the island. It raises the theme of the Soviet occupation of the northern islands of Japan at the end of the Second World War, about which little is known compared to the aerial bombings of mainland Japan and the Battle of Okinawa. Depicting the harsh realities without propaganda from the point of view of children, thus offering a wide generation, including kids, the opportunity to reconsider history. It is indeed a deeply poignant work. Opinion was divided among the judges regarding some aspects of the script and direction, but even as a work that wholesomely moves the viewer it is worthy of an award. (KOIDE Masashi)