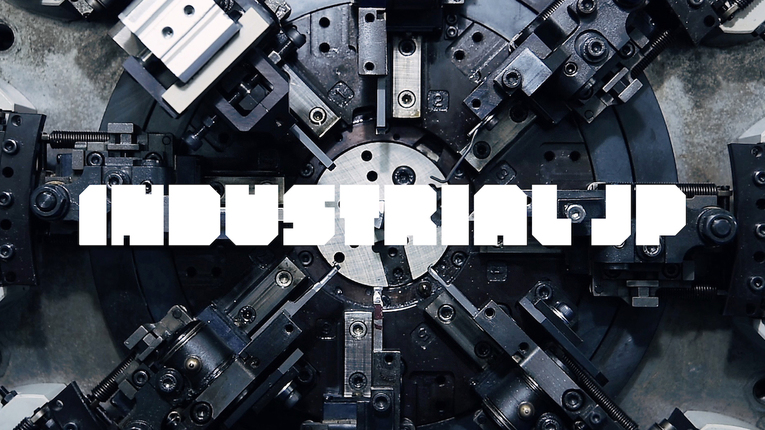 INDUSTRIAL JP is a music label that creates and distributes musical com- positions and music videos by re- editing video samplings of machine tools in operation and eld recordings of sound in small factories located here and there in Japan. Numerous musicians and factories producing springs, screws, and the like col- laborate to produce club music out of analog sounds of machine tools at work. Seven works have been released as of March 2018. The reverberating sounds of operating machines and gleaming, well-oiled machinery in motion continuously construct a constant rhythm that is presented in beautiful sound and video. Establishment of the label was motivated by a strong sense of the impact of dwindling domestic indus- try caused by globalization. The label aims to help boost domestic manu- facturing by communicating the ex- citement of small factories in Japan. The website features interviews with the various factories and has become a platform for sharing the advanced technological capabilities of small factories and the appeal of state-of- the-art products crafted by that tech- nological power.

INDUSTRIAL JP has succeeded in keenly conveying the factories’ high level of technological skills and the aesthetic beauty that exists alongside such expertise. As a result, the cap- tivating quality of the 7 factories has been demonstrated in a previously unknown form. Then there is the mu- sic. The musical compositions from 7 musicians produced from sounds taken from the factories are of a level that is the ultimate in unique cross media. The fascination of factories comes across through the unspoken persuasive power of video that pos- sesses the originality of that fascina- tion, but the composition of captions and interviews is also outstanding. The works cut across the catego- ries of entertainment, documentary, advertising, and editorial, and are multi-tiered, carefully created in a for- mat that introduces the audience to varieties of expertise. In both content and form, the works seem to bring together the symbolism of a chang- ing era at a high level. In the past, the term “industrial music” was used with irony, but this feels as if the art has advanced to a new stage.(SATO Naoki)