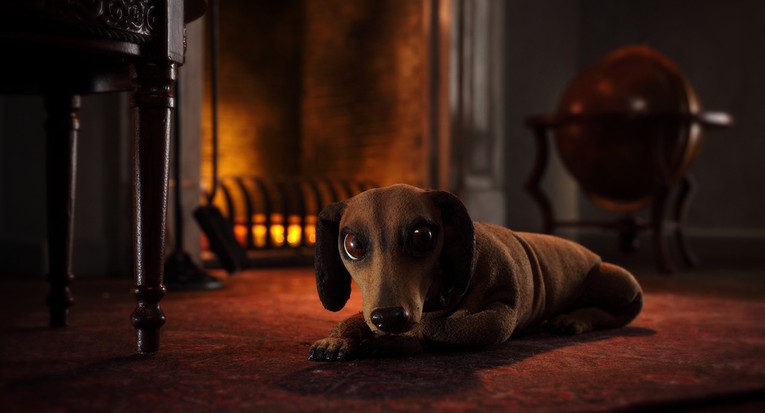 In this animated short film, a dog, Popi, and a monkey, Huhuu, wait for their master to come home, after he never came back one day. Although Huhuu is in a cage at first, he manages to escape from it and the two animals begin their lives together. Popi is smarter and stronger than the monkey, but being also obedient and subservient, he always surrenders to Huhuu’s whims. On the other hand, Huhuu is licentious and foolish, and treats the home however he wants. Based on the short story Popi and Huhuu (1914) by the Estonian writer Friedebert TUGLAS, this stop-frame animation is made using real puppets in an attempt by the artist to inquire into the nature of fear and folly of authority, and what is authority. Who is our master? What would happen, if the character and actions of our master were like Huhuu’s? The film not only deftly expresses animal-like movements but also portrays a strong concept.

This is a film made to an extremely high level of perfection. It features a dog and a monkey (chimpanzee). The abilities of the animator come through in each puppet’s realistic movements and deft performance. These abilities along with the dramatization and direction from the beginning to its tragic ending, exemplify how this is truly the work of a masterly professional. The lighting and camerawork in the composition of the screen, in addition to the sound effects, all superbly evoke a real space. The fear the dog Popi feels toward the monkey Huhuu symbolizes obedience and subservience, while the monkey represents brutality, wantonness, and folly. The dog and monkey are not anthropomorphized and yet each has detailed emotional expressions, especially the dog. The monkey, however, does have scenes where it displays something nearly identical to humans. This was no doubt in order to accentuate the development of the story, but these parts had a staged quality that left a slight question mark. The obedience, so tragically earnest, and the foolish brutality leads to a downbeat ending filled with emptiness and hopelessness. Is it brutal for me to forcibly interpret the story of the dog and the monkey as one of the senseless transient world? (OHI Fumio)