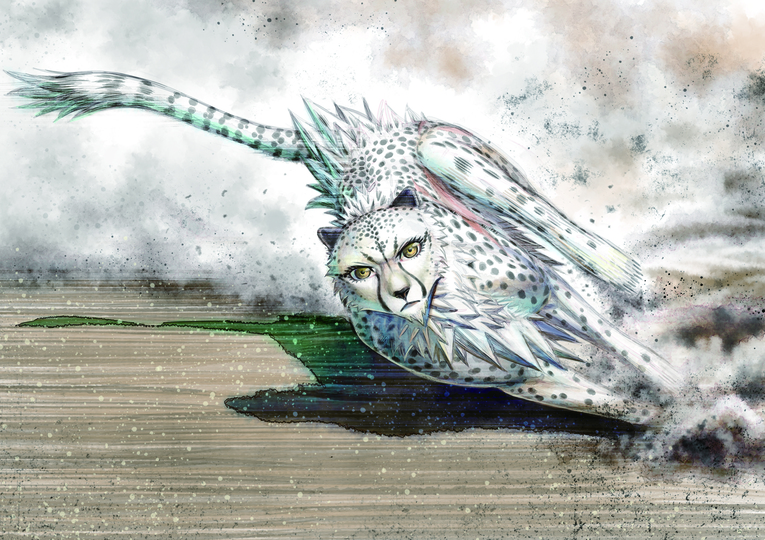 Lions rule the wild kingdom that is the setting for this manga about a violent anarchy of animals. Unlike zebras and other herbivorous inhabitants of the kingdom, the Thomson’s gazelles are not prey for the lions—because they “taste bad.” The leonine elite are, in fact, gourmets obsessed with delicious food. Arrayed against them are the defiant gazelle Buena, the legendary cheetah White Devil who confronts the lions head-on, and a coalition of carnivores, herbivores, and omnivores who rise up in blood-drenched rebellion against the royal family. The author draws all these ostensibly four-legged creatures as bipeds, yet renders each species in such realistic detail that the work succeeds in persuading us that such a world just might exist somewhere.
Miracle Jump (Shueisha)

The author leavens the potentially pastoral setting of an animal kingdom in rebellion with plenty of tension, passion, and brutality. Also novel is the premise of animals challenging the morality of a value system that judges them not only by the criteria of strong vs. weak, but also appetizing vs. unappetizing. Most jurors agreed that something resonated with them in this work. The physical traits, movements and expressions of the animals abound with the author’s sheer joy in the act of drawing, and every frame manifests the same degree of painstaking devotion. There is something nostalgia-inducing about this singular style, and one hopes the author will continue to expand and develop it. (KADOKURA Shima)