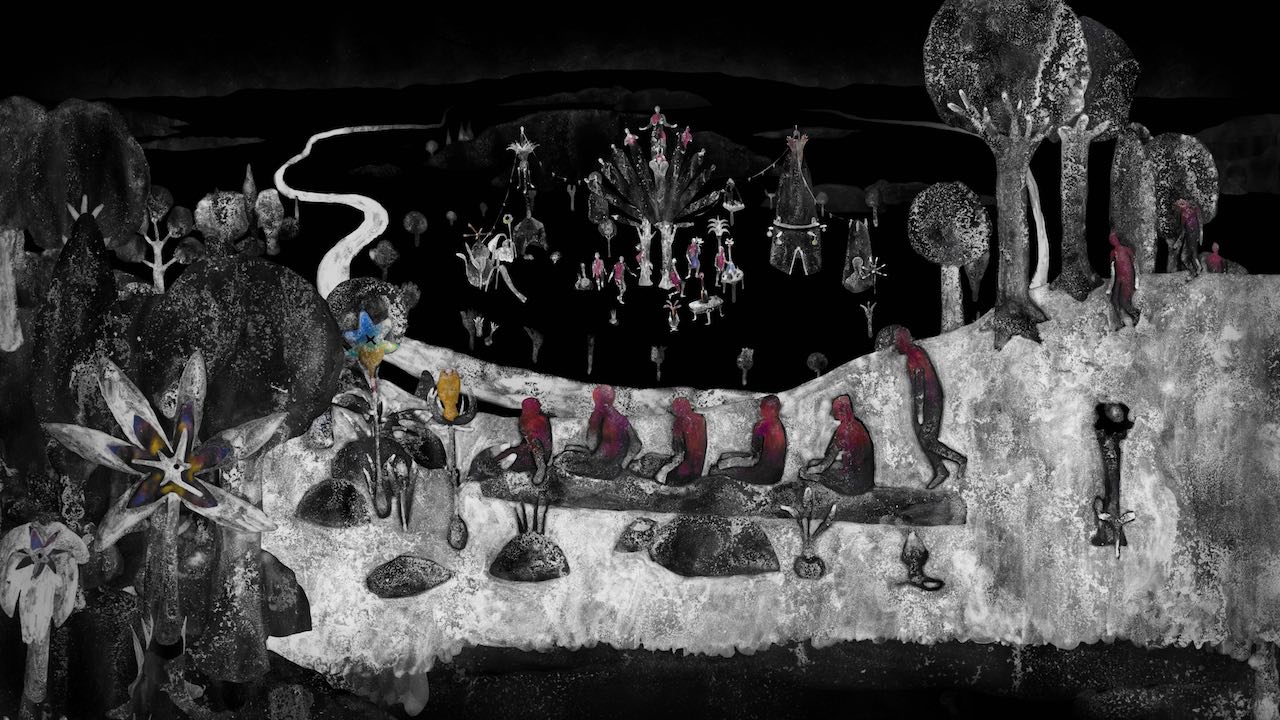 A short animated film inspired by Dante Alighieri’s Divine Comedy Inferno. Approximately 3,500 pieces of Indian ink and water color are digitally edited and overlaid by an original music of string orchestra fragments and electronics. The scenes are largely divided into the Earth and the Hell. There is a seed-like object, from which roots extend to create the Earth. There, life circulates as the plant and human transform into each other. The celestial beings, who look like a bird and a person, loop around in the sky. In the image plane which has unique darkness created by reversing the black and white of the ink painting, the vibrant colors in the center of the plants, people, or celestial beings, move lively, expressing the force of life. Eventually on the Earth appear tools that resemble musical instruments and buildings. Halfway into the film, the celestial beings descend to the Earth and begin destroying the activities there, disturbing the world’s order and creating chaos. Initiated by these terms, a tragic fall leads to the parturition of the crucial opposites: Hell and Heaven’s circles. The film, referencing the masters of the Western art history from Renaissance Sandro Botticelli to Pieter Bruegel the Elder, Francisco de Goya, and Henry Derger, depicts the grand theme of loops, metamorphoses, and degeneration and regeneration.
14 min. 22 sec.
© Sacrebleu Productions

This animated short film is the ultimate piece to observe and experience emotionally. The heavy, dark, matter-of-factly depicted world is simultaneously peaceful and somewhat disturbing with the perceived refusal to see reality for what it is. The persistently repetitive expressions and the moving parts are dispersed in various spaces in a manner reminiscent of pieces of a puzzle that should be put together, and this allows the viewer to take in the picture in its entirety from a floating vantage point. Just like the visual images, the soundtrack of the film is a minimalistic and simple composition that successfully creates a unique world. The mixture of the soundtrack and the visual images further expands the mystical ambience of this world. The expressions that convey the unusual sensibility of the author are not on a level accessible to everyone, but they open up new territories to which one must resign oneself, and highlight the power and sense of presence of this film as a work of art. The approach of putting together numerous small individualities and producing an aggregate with distinct individuality generates associations with the modalities of actual human society. The author uses chaos, confusion, and harmony to create unique beauty, thus producing a smooth minimalistic animated film with an extremely high level of accomplishment.
(MORINO Kazuma)