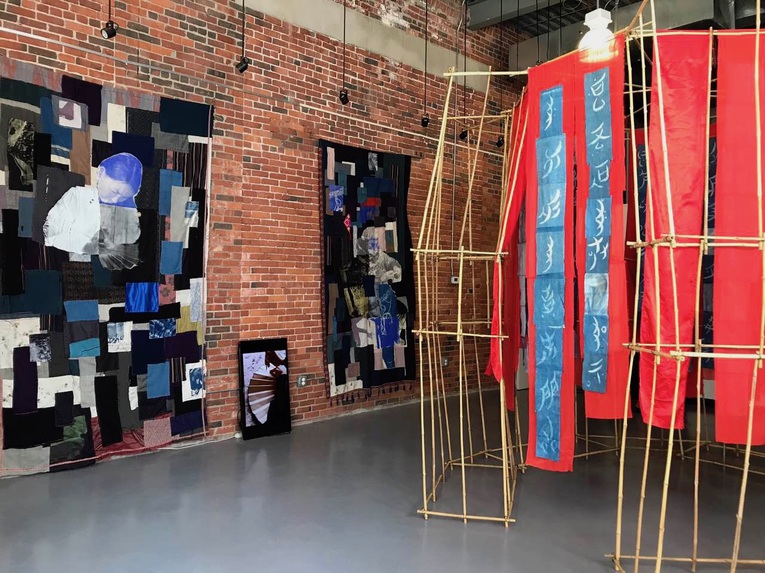 This video installation focuses on NüShu, a language spoken only by women in certain villages in Hunan Province, China. It is believed that NüShu was created by women to tell each other their feelings found in life. The artist, who has strong inter-est in language, visited a village in the province from 2015 to 2016 for research, and encountered women forced to perform the language as a tourist attraction for menial wages. In this video installation, three women are sitting in a dungeon-like room. As their boss, also a woman, pulls the strings, the women’s plaited hair gets pulled, and they start embroidering ordered letters onto the cloth. As they keep working, they become trapped inside the cloth and at the end are sold with the embroidery as a product. This piece shows how NüShu, which has gained popularity as a dying language, and the culture surrounding it are treated as a commodity.

At the beginning of the video, we see women in the present time who in- herited and use, as their vocation, the language of Nüshu, a language that has been passed down within the Jiangyong County in Hunan, China. They “report to work” at the “fac- tory that produces words,” change out of their Nike sneakers and their own clothes into their “costumes” and get to “work.” In a manner that is reminiscent of the film Brazil (1985) or Matthew BARNEY’s CREMASTER, these women are trapped in a fantas- tically moving system and vivid color schemes. As they write and embroi- der the Nüshu text, they appear as if they start pulling and wrapping the threads around themselves, causing themselves to get completely bound up. Toward the end of the video, we see a glimpse of the real landscape and women of Jiangyong County. In 2017, at a time when the contempo- rary art festivals being held in places like Venice, Kassel, and Münster demonstrated a syzygy that comes every 10 years, every place was over- flowing with dystopian works pointing out absurdities in our societies, as if bragging about their misfortunes. The depiction in DAI’s piece, on the other hand, shows things that are real while never leaving behind a subtle sense of humor. For this, I applaud this piece highly. (MORIYAMA Tomoe)