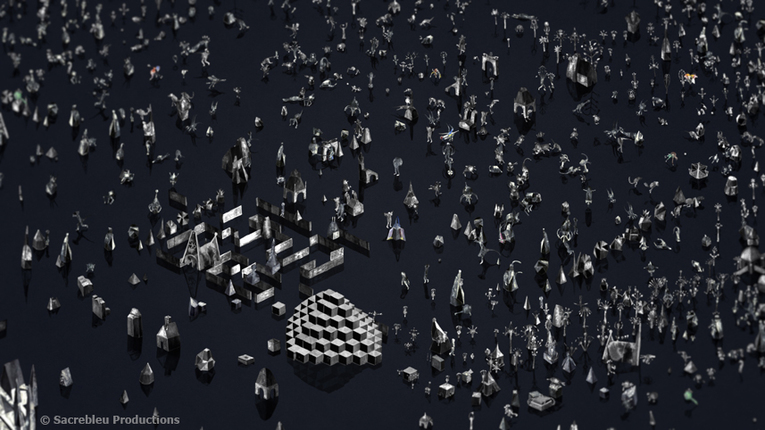 This animated short film is remarkably elaborate and radically composed. Its world, endlessly generated from the smallest possible units, is the universe itself, where every element continues to transform, correlate, and influence each other. The title Rhizome is a reference to a concept elaborately elucidated in A Thousand Plateaus (1980) by French philosopher Gilles DELEUZE and psychotherapist Pierre-Félix GUATTARI. The animated film encompasses all the principles of rhizome while also examining its biological meaning and a philosophical discussion. The artist says he wanted to create something out of the various elements of Steve REICH’s concepts of music, the mathematical artworks of ESCHER, the paintings of BOSCH and BRUEGEL, scientific theories about evolution such as genetics, and the relationship between micro and macro. Within this, DELEUZE and GUATTARI’s concept came into this head and became part of the work. The unique film embodies the interests and appetite of a young artist.

Intrinsically, scale in animation has always been artificial and relative. In this film, abstract forms, neither organic nor inorganic, constantly change within a virtual scale; individual movements connect to the overall. Previous films that similarily move from the micro to the macro in a single take include the classic science animated films Cosmic Zoom (1968) and Powers of Ten (1968). Yet, this work does not adopt a scientific perspective, and rather reveals a BOSCH-esque, subjective recognition of the world through overwhelming quantities of drawing and digital composites. There is a joy that comes from glimpsing unknown ecosystems, the primitive fascination about animation that offers an artificial feeling of vitality in pictures. The world, zooming out from the micro to the macro, is like moss, while the inverted sensation of going from macro to micro is also very unique, when the ending reveals what we thought was macro is shown to be only a tiny world. (YAMAMURA Koji)