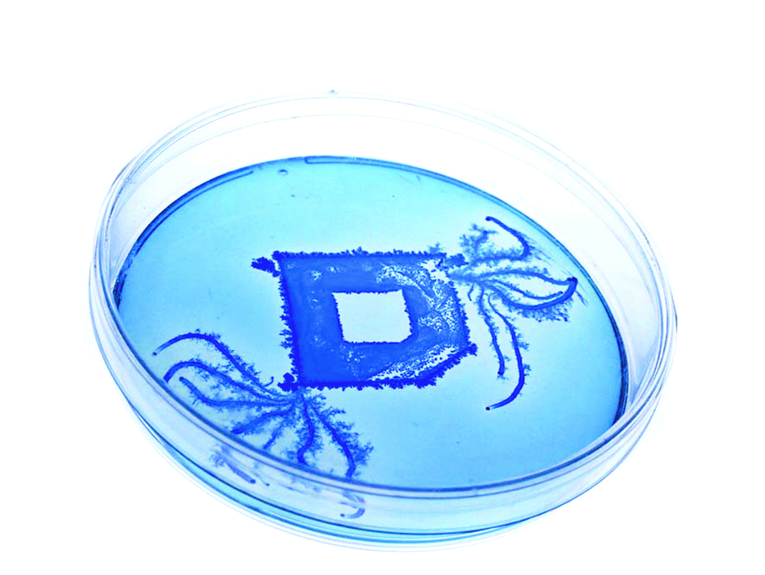 The Living Language Project is a linguistic research project that utilizes scientific methods and explores the boundaries between culture and nature. It proposes a new possible evolution process for the Hebrew alphabet that may have occurred during the 2,000 years the language was considered dead. The core element of the project is “Bio-ink,” a type of ink the artist created with a bacteria called Paenibacillus vortex. With this ink, old Hebrew characters were written in petri dishes, where an additional layer of protein or food in the shape of contemporary Hebrew characters was superimposed on them. As the bacteria move toward the food, the entire colony of the bacteria gradually grow or “evolve” into the shape of the new character. Bacterial growth is affected by environmental conditions such as food availability and temperature. This project deals with the tension between the desire of humans to control the behavior of living organisms and the forces of nature running their own course. It is also an attempt to propose a possible process by which a living language can gradually evolve. The artist combines research, experiments, and results with his original theories to reexamine nature, culture, and language including the letters. He also investigates to what extent technology and nature’s designs can coexist and interact with each other in the field of synthetic biology.

It has been a while since bio-art has garnered global attention through international festivals and the like, and it is recognized as a branch of multidisciplinary “hybrid art” in the broadest sense. Yet, as more artists become involved in this field, more abstruse, high-context works without much explanation have been created and shown. Therefore, whether the artists’ ideas are conveyed effectively through their works seems to be more important than ever. This work, which employs bacteria as a literally “living” language and petri dishes as a medium, morphs ancient Hebrew letters from a language that has been dead for several millennia into contemporary Hebrew letters. The designer, who has a background in linguistics and archaeology, is to be praised for the clarity with which he has posited his simple and direct questions. When considering the morphing of ancient letters using microorganisms, the unpredictable aspects of bacterial growth are included in the process as a variable. It is as if this work is setting an example for the media arts surrounded by various variables—unpredictable changes awaiting our civilization, culture, and letters, or even the transformation of the shape and name of the media that carry everything—as to how to survive through the many generations to come. (MORIYAMA Tomoe)