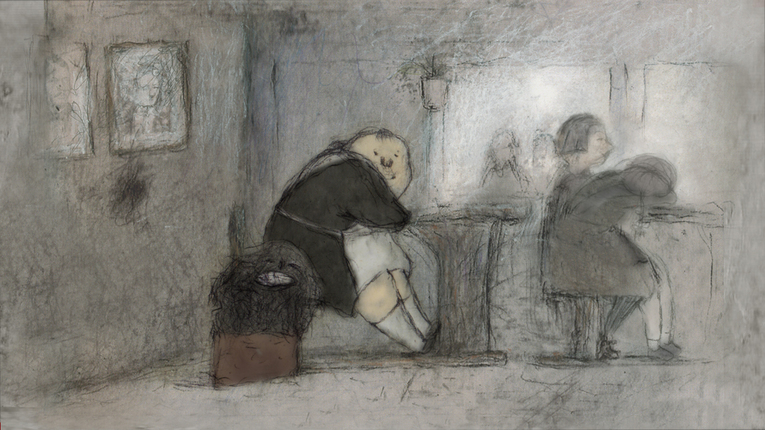 A little girl suffers from an emotional wound. In her imagination, the “wound” takes on a life of its own, in the form of a shaggy creature that becomes her best friend. They grow up together and, firmly ensconced in the mind of the girl, the wound starts to control her life completely. Based on impressions from the author’s own childhood, the starting point for the film was the creation of a shaggy black creature, The Wound, which increasingly gains presence and becomes the girl’s closest companion. Anna BUDANOVA made this film with a small team of friends, especially dedicating efforts to the sound production: “The most enjoyable moment was making sound and noise. For some parts, we used water pipes in order to create a peculiar soundtrack.” This animation portrays the relationship between the girl and the wound in pictures that are simultaneously both nightmarish and hauntingly beautiful.

The movement is dynamic, with a sense of excitement and winsomeness that feels nice to watch. The expression of the individual characters and the ideas are carefully ordered. The musical sensibility astonishes, a tumult of tension forever on your back in every scene, as does the perfection of the layout, how you can stop the film at any point and the frame will look like a veritable picture book. I want those who believe that their deep emotionalpain cannot be understood by others to see this film. It asks questions like how to love your own pain and what to do if you choose the wrong way to love. The jealousy, misunderstanding, sadness and pain that arise from solitude and love cannot be avoided if we are to grow as individuals. People cannot live without others. She wants to make friends but is afraid of rejection. She knows nothing will change if she just waits, but given up halfwaythrough trying a new challenge. These emotions in the film tell us that it wasn’t just you who felt like this. The artist is a mere 26 years old and we can surely