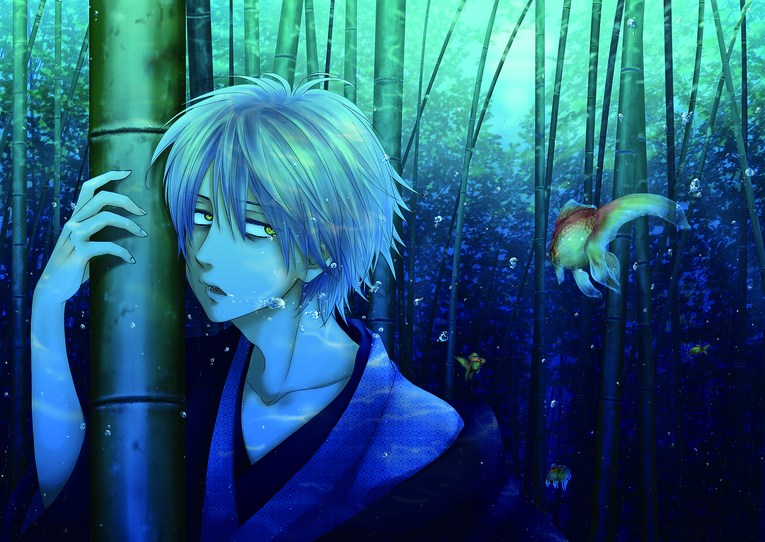 Tsuki ni hoe rannee (Can’t be Howlin’ at The Moon)

This manga vividly revisits Japan’s modern era and the poetry written by such modernists as HAGIWARA Sakutaro, KITAHARA Hakushu, and MUROU Saisei. It does so through characters created in the image not of the poets themselves, but of their poems. These protagonists gather in a fictitious “town of poets” where they devote themselves to their art. With the appearance of a mysterious corpse on the edge of town, the community begins to be drawn inexorably into the turbulence of Japan’s prewar and war years. Unable to resist the mood of the times, the poets become increasingly pro-war in their output. The words of the characters, which quote liberally from numerous verses, offer a keen perspective on both the virtues and vices of the poets—their determination to pursue their craft, the painful awakening to self-awareness of modern women, the culpability of writers during wartime.
Monthly Afternoon (Kodansha)

They may be quoted for posterity in textbooks and their birthplaces may become tourist destinations, but the lives of poets are arguably more fraught with risk than those of present-day pop stars. Poets dwell at the bottom of a stratified society; they suffer for their talents in their relations with even the most understanding friends and spouses; in times of war they may write verse on behalf of the nation only to be castigated as war criminals when peace returns. The author of this manga keeps up with her protagonists, recording every scowl, every howl as they recklessly careen, delusions on parade, through the wild and woolly world of poetry, a realm isolated in its own space-time continuum. It impresses me as a critique of modern poetry realizable only through manga, not mere text. (MATSUDA Hiroko)