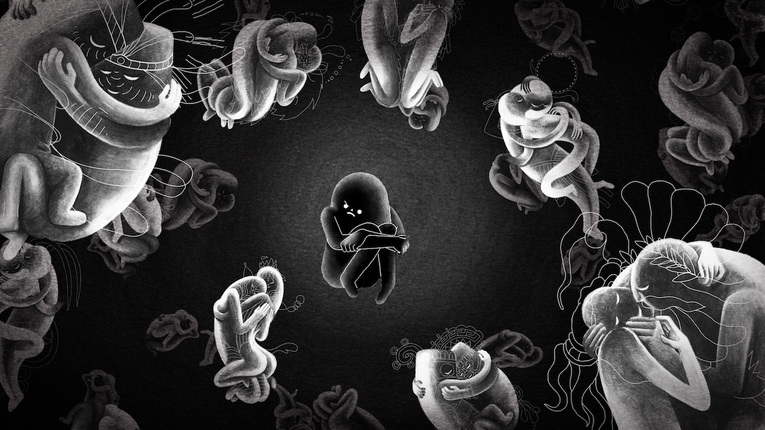 God is all alone, and is jealous of the happiness of others. When he blows out his breath, he creates a swirl of molecules that form a at disk. In the middle of the disk, the axis rotates, re- sulting in a stereoscopic mountain. To complete this world, this god leaves various elements, including a woman (dark) and man (light). These two, who appear separately, try to meet, but the god lls the world with various physical aberrations and illusions to prevent light and dark from meeting. Nicolas FONG has produced many works as an animator, and he has ac- tively publicized works in his private life as well. This work was produced with the famous Belgian studio Zo- robabel. Freely using the distinct fea- tures of planar graphics, he skillfully depicted a contemporary myth about the world’s creation.

This god realizes that there are gods in pairs all around him, and he is the only one that is alone. He creates light and dark, divides it into two and makes them a man and a woman, but the two are drawn toward each other. This seems to depict the pent- up desire of the many people who live solitary lives in a world of imagination. This desire is repeated over and over again as the man and woman attract each other. The man and woman merge, take the shape of the earth, and begin to revolve around the god. This is a new myth in which the world is created from the wild idea of a god drawing together a man and a wom- an. (YOKOTA Masao)