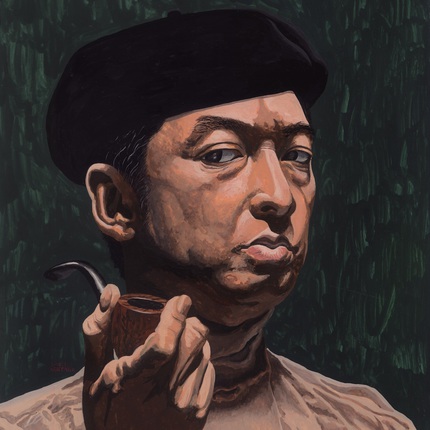 Thisisthepublicationinbookformof a gag serial that originally ran in the Monthly Comic Beam (KADOKAWA) starting in 1998 and went on to be- come the magazine’s longest-running comedy series ever. Along with stories based on famous manga and movies that were told on stage by a rakugo (comic storytelling) artist and used as is for this “rakugo manga” series, UENO has made full use of his vari- ous artistic skills to create 42 works of comedy, including “nonsense comedy,” in which traf c signs written in the styles of various artists actu- ally appear, comedies with subjects such as karuta (a Japanese alphabet card game), courtroom artists, TV shopping, and Schubert’s Erlkönig, and parody “mourning services” for MIZUKI Shigeru, ORAI Noriyoshi, and MOCHIZUKI Mikiya. Since his debut as a manga artist in 1983, UENO has proven himself adept at elaborately depicted illustrations and absurd and surreal jokes in works such as Boshi otoko wa nemurenai (The Guy in the Hat Can’t Sleep) (1992) and Hima ari (Got Free Time) (2000-02). In the current work as well, UENO’s unique structural and presentational abili- ties are put to good use to serve up a succession of jokes and parodies, which he takes painstaking efforts to deliver.

This book is not only superior as gag manga fare, but also full of fun and plotting that sheds light from unex- pected angles on a diversity of man- ga expression and possibilities. The powerful depictions and sense of humor are reminiscent of modern literature such as Raymond Feder- man’s Take It or Leave It. It is a rare book, with no page numbers, filled with hundreds of pages of chock- full-of-words passages that surge forward like rap lyrics. Yet, it is not confined to novel form or any other model, and the author devotes him- self entirely to endlessly unfolding re- flections on literature. UENO flexibly uses rakugo narration while enticing the reader into a delightful and non- sensical world as only he can. The reader is overwhelmed by his stead- fast powers of observation of every- thing under the sun, his witty sense of humor, the stoicism with which he reliably points out the ridiculousness and irrationality of human society, and his skillful manga expressive- ness backed by an educated so- phistication that lets him travel freely across both manga and art history. (FURUNAGA Shinichi)